A Website of The Centre for Public Legal Education Alberta

What laws regulate cannabis in Alberta?

Cannabis is governed by federal laws, provincial laws, and municipal (towns and cities) bylaws. The most important laws in Alberta governing cannabis are:

Each town or city also has bylaws about the use of cannabis within its boundaries. For example, Edmonton has a Public Places Bylaw with rules for smoking or vaping in public spaces in Edmonton.

Property owners can limit the use of cannabis on their property, such as condo corporations, landlords, and colleges and universities. If you live in a condo or rental unit, you should review the condominium corporation or landlord’s rules on cannabis. See [here] for more information on cannabis in condos and rentals.

It is your responsibility to know which laws, policies, and rules apply to you.

I thought cannabis was legal across Canada. Why does the Province of Alberta and each city or town have its own laws about cannabis too?

Below is a summary of what each level of government regulates for cannabis: 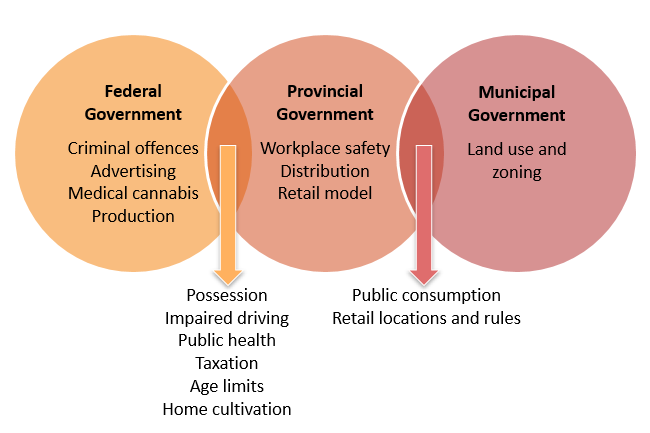 Because the laws can change even from city to city, it is important to know the rules of the place where you live or visit. For example, it may be legal to smoke cannabis on the street in one city but illegal in another city.

What is the legal age for cannabis in Alberta?

In Alberta, the legal age to buy, use and grow cannabis is 18 years.

It is your responsibility to know the legal age for cannabis in the province where you live or visit.

Are there limits on buying and possessing cannabis in Alberta?

It is illegal for youth (under 18 years) to have, distribute or grow cannabis.

What happens if someone under 18 gets caught with cannabis?

In Alberta, youth between 12 years and 17 years (called a “young person”) cannot possess (have), distribute or produce cannabis. If a young person breaks this law, they can be charged under the Youth Criminal Justice Act.

A young person who possesses (has) or distributes 5 grams or less of dried cannabis (or its equivalent) will not be charged criminally. However, their cannabis will be seized, their parents or guardians will be notified, and they will receive penalties similar to those for underage possession of tobacco or alcohol.

The law for youth may be different in other provinces, including different legal ages for cannabis and different penalties for youth.

Is it legal to use cannabis anywhere?

No. The same way that drinking alcohol and smoking cigarettes is limited to certain places, so too is the use of cannabis. Alberta has laws prohibiting smoking or vaping in certain areas. Each city or town can also make bylaws that further limit smoking or vaping within their boundaries.

It is your responsibility to know the laws of the place where you are living or visiting.

Can I use cannabis within National Parks in Canada?

In all National Parks across Canada, you can use cannabis at your registered Parks Canada campsite. However, you cannot use cannabis in campground common areas (such as shelters, playgrounds, washrooms, trails, and roads).

In National Parks in Alberta, you are allowed to use cannabis publically, including day-use areas, trails and backcountry, but you cannot smoke or vape within 5 metres of playgrounds. Many campgrounds within National Parks in Alberta have added further rules that do not allow use between 11pm and 7am and during long weekends in the summer (Victoria Day through to Labour Day). These restrictions are similar to alcohol rules in these parks.

Towns within the National Parks each have their own bylaws for cannabis use within the town boundaries. For example, you cannot smoke or vape cannabis in public places within the towns of Jasper or Banff but you can within Lake Louise and Waterton Park.

For more information about further restrictions on cannabis in specific National Parks in Alberta:

Can I consume cannabis in Provincial Parks in Alberta?

The above law applies at Alberta Parks’ campgrounds along with additional rules:

Can I consume cannabis in public in every city or town in Alberta?

No. Each municipality (city, town, village, hamlet, etc.) has its own rules about whether or not you can use cannabis in public places. There are also rules that apply all across Alberta (including in each municipality) that prohibit cannabis use in certain places (such as restaurants, bars, workplaces, public transit, hospitals, schools, child care facilities, playgrounds, or within 5 metres from doorways or certain buildings or areas).

Your use of cannabis on private property may also be limited by the owner of the property, such as a landlord or condominium corporation.

It is your responsibility to know the laws of the place where you are living or visiting.

Below is a summary of the public use bylaws in several towns and cities in Alberta:

For information about public use rules in other municipalities in Alberta, check with that municipality’s local government. You can also call 311 for more information.

Is all cannabis legal now?

The production, distribution, sale and consumption of cannabis is very regulated in Canada. Only cannabis produced by licensed producers, distributed through licensed channels, and sold through licensed retailers is legal. All other cannabis is illegal. For example, buying cannabis from a friend or a street dealer is an illegal purchase and the cannabis purchased is also illegal (it is called “illicit cannabis”).

Where can I legally buy cannabis in Alberta?

You can legally buy cannabis in Alberta from two places:

It is against the law in Alberta to purchase cannabis other than from these two sources.

You can only buy up to 30 grams of dried cannabis (or its equivalent) per transaction.

Can I drive with cannabis in my vehicle?

If you are transporting cannabis in a vehicle, it must be in closed packaging and out of reach of all people in the vehicle, including the driver.

Can I grow my own cannabis plants?

Canada’s Cannabis Act allows a person to grow up to four cannabis plants in their home. The seeds must be bought from a licensed retailer. Alberta follows this law. Other provinces have different rules. Manitoba and Quebec do not allow you to grow your own plants.

If you live in a condo or rental unit, the condominium corporation or landlord may not allow you to grow cannabis plants on their property. Check your bylaws or lease.

What does “equivalent amounts” mean?

Canada’s Cannabis Act often says: “cannabis of one or more classes of cannabis the total amount of which, as determined in accordance with Schedule 3, is equivalent to…”

Edible cannabis, as well as extracts and topicals, purchased from approved licensed producers and sellers are now legal in Canada. Starting October 17, 2019, licensed producers can submit applications to Health Canada for approval. Edibles and topical products must be approved before they can be sold. The approval process takes 60-90 days. Edible and topical products may start appearing in stores around mid-December 2019.

Edibles must follow very specific rules about packaging and advertising. For example, the packaging cannot appeal to children. As well, even though the federal government legalized them, each province can further regulate the sale of edibles, extracts and topicals.

Do the same rules apply to medical cannabis?

You can possess the amount set out in your registration plus the amounts allowed for recreational cannabis.

For more information about consuming medical cannabis in a rental unit or condominium see [here].